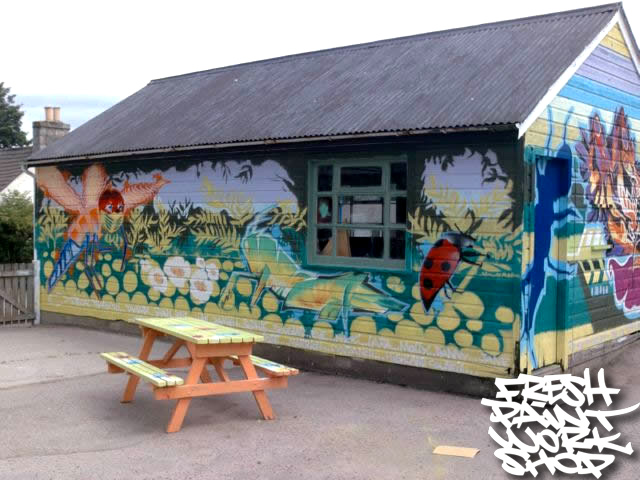 Giant beasties have been found crawling around Granton primary school, but there is no need to call rentokil- the bugs are the creation of Inverness graffiti artist and the youngsters of the town.

Marc Delaye and a group of 11 to 15 year olds have been giving a colourful new lease of life to a ramshakle shed in the grounds of the primary school, which was formerly a classroom.

The four sides of the building have been covered in images of gigantic, brightly coloured bugs surrounded by exotic plants and grasses of all different, shapes and colours.

Funding for the project which was completed on thursday after several days of hard work, has come from the highland council, and childrens services workers from Grantown and Aviemore were involved in bringing the project to life.

Head teacher at the school, Mairi Robertson, is delighted with the result.”the shed was a classroom many years ago, and has been an eyesore for a long time”she said.

“the children will all be delighted when they come back from their summer break next month and see the transformation.

”we are really grateful to allthe youngsters who have been involved in creating these wonderful beasties.

I must admit when i walk past the mural it helps put a smile on my face-it just has that sort of effect. I just hope it does the same for everyone else.

School neighbours George and Mabel Paton have also been admiring the new artwork dreamed up by spray can artist delaye and the local yougsters.

”It is really colourful and a great improvement on what was there”,mr paton said from their house which overlooks the shed.

Jane Wilson,children services worker for grantown,said that the project had caught the imagination of the youngsters.”they have been so focused and hard working… 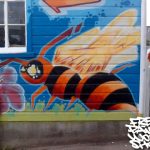 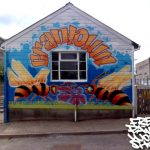 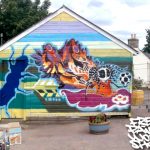 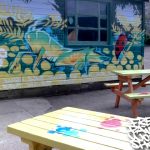 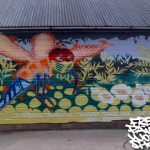 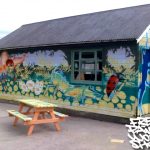 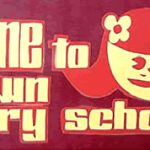