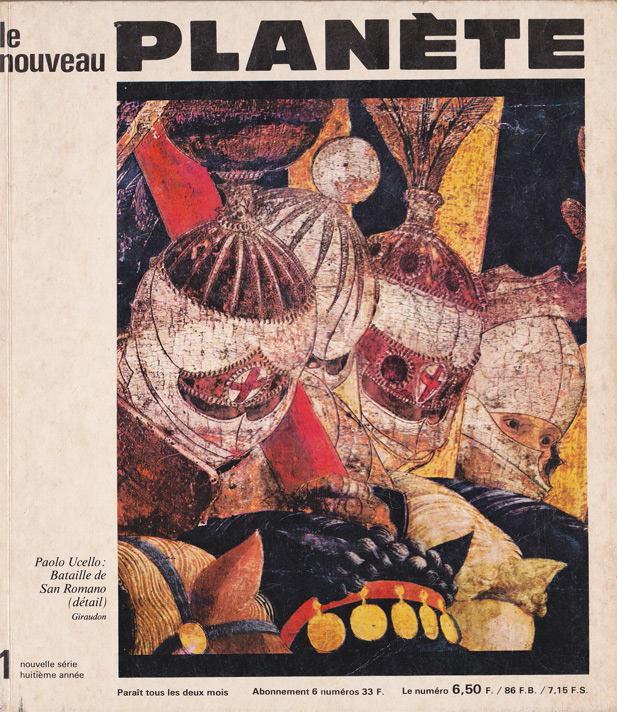 Published in The new planet magazine. Although I agree with you about the terrible condition of the world, I’m not as certain as you seem to be on how to put things right.
As you know I never belonged to any political group, religious or social: I was content to write and paint. As you get older, I wonder about the strength of the written word. When I was younger, I read all the fiery revolutionaries, libertarians, sages, saints, and in my work I have endeavored to bring out in the reader, the spark that would encourage him to change his lifestyle. But when I see what is happening here, there, everywhere, I wonder if my words have had the slightest effect. No doubt this world is far worse than where I was born.
What I’m saying, my dear Pauwels, that is, if the words of the greatest minds throughout civilization had no effect on the mass public, would there not something flawed in this method of regeneration? The great truths of life have been thousands of times hackneyed, but only a handful of individuals were able to enjoy it. Large specimens have appeared, but their followers are just cartoons. Off the heads spirituels known, there are and have always been of great masters who remain hidden from the world and make no effort to reach the masses.
When I think of these great figures, known or unknown, the word freedom does not seem entirely appropriate. I would say emancipation, self-realization, fulfillment, service. or more precisely, freedom to serve humanity. For this purpose, it must be free not only from the bonds of society, also of his own ignorance

A reality of a different order
Another idea comes to mind. What is the true nature of the problems that beset us? Can you solve them with a right thought, right behavior, a united front, or are they part of the zeitgeist, of human destiny? Problems need to be resolved, or are they there for us to test? Sages, we observe it, do not seem to care at all for them-they are illusory. Being truly integrated accept as part of the order of life and thereby become immune.
The question I ask myself is: Can things really be changed into a paradise on earth, or a utopia, assuming that such a state is definable, or what we call our problems would disappear they automatically in a vision exalted life? In short we are moving to slow and painful from what we call “progress” or unexpected jumps, produced by unpredictable events and almost miraculous? We know that discoveries and great inventions have to profound innovations in society. We know that the appearance of extraordinary individuals, good and bad, have brought great changes. We still have to know what changes would result in incalculable space exploration. The possibility of contact with superior beings from other planets brings with it unpredictable revolutions in the life of this earth. Our whole conception of heaven on earth may seem childish or naïve if one day we enter into contact with such beings.

The symphony of Man
I do not claim that the path of the wise or the Master is the one that suits each of us, its role is not like ours Ondoure provisional. There is no more able to choose another kind of life that we who are murderers, liars, thieves, cheaters and the rest. Together, saints and fishermen, we compose the symphony of man at the present stage of evolution. The problem however is that there symphony and symphony. Ours is not the first, will not be the last. But, and here is the crux, I think – are we able to orchestrate the notes of the next symphony, or we limit ourselves to play our part when it comes?
I was going to say when it will explode because the “bursts” are part of this obscure thing, called creation. If we can not govern the conduct of our own lives, we certainly can not direct the whole. Despite our plans and forecasts, things happen that are completely outside our control. We have no part in our birth, we do not, or very little, when we die. We can accept no more than what happens to us. how each individual acts and reacts is registered in its intimate destiny. The hero does not deserve more praise than the ignominy of cowardly. The great sin is igorance. But how to make a fool wise, in a jiffy?
I was obviously influenced by the great libertarian, the great sages, the great spiritual masters of yesterday and today, but maybe I was lucky to have been open to such influences . I must admit that the idiots, morons, the gullible, charlatans also influenced me. All have played their part. I know of no precept that allows us to choose.

To each his own way
I do not know my dear Pauwels if this answers your questions. Probably not! But sometimes a question raises another. I’m not even sure to share your intense concern for the state of the world. It seems to me that there are two ways of looking at the evils that afflict us. The first is to rush to do something, intelligently or not. May I always thought we should first find out what was wrong with us and if possible what was. This is a task that can take a lifetime. With understanding comes forgiveness and acceptance, not only of others but of ourselves
There are people who have found their salvation behind prison bars. There are men, great men who have chosen to beg. There are men who chose to die rather than take up arms for their faith. There are some who have chosen to reject the Nirvana and resume the round of life until the last man has found its way to completion. To each his way, to each his own.
I agree that words have power, but their power remains for me, a serious question. Listen to them all, because sometimes the insane speaks words of wisdom.